Heart Disease and Stroke: The Facts 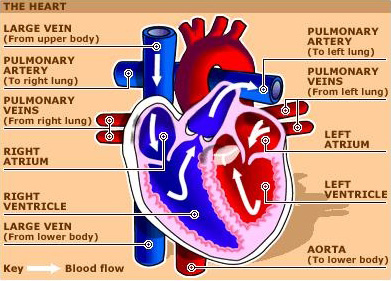 The UK has one of the highest rates of death from heart disease in the world – one British adult dies from the disease every three minutes – and stroke is the country’s third biggest killer, claiming 70,000 lives each year.

Heart attacks occur when blood flow is blocked, often by a blood clot, while strokes are caused either by blocked or burst blood vessels in the brain. A range of other conditions, including heart failure, when blood is not pumped properly around the body, and congenital heart defects can also cause long term problems, and even death, for sufferers.

Left atrium – The blood returns from the lungs to the upper left chamber of the heart where it is again briefly stored until the atrium fills, before flowing on to the left ventricle.

Right atrium – “Impure” or “blue” blood returning from the atrium enters the heart here, where it is held until the atrium – or chamber – fills up.

Left ventricle – This is the most powerful chamber of the heart. It pumps the newly oxygenated blood to the rest of the body through the aorta, or main artery.

Right ventricle – This powerful pump propels blood into the pulmonary artery, the tube which carries blood to the lungs, where carbon dioxide in the blood is removed and oxygen added.